Soleil and Zahir meet in the Midwest—sort of. They catch up on their adventures as Soleil prepares to depart to Mexico once again.

In this episode, we speak with Victor Interiano, creator of Dichos de un bicho, a blog centered on issues that concern Central Americans and Latinidad. Interiano is also the creator of a left-of-center charismatic cartoon cat named Puchica Puchin.

We also run a story on Sita Kuratomi Bhaumik that was previously published on Raw Material, an arts and culture podcast by the San Francisco Museum of Modern Art. Sita Kuratomi Bhaumik is a conceptual artist working with craft and food to tell the stories of migration that is based in Oakland, California.

Produced by Juan Ramirez. Music by AF the Naysayer and Blue Dot Sessions. Additional production is by the San Francisco Museum of Modern Art and Geraldine Ah-Sue with music from Podington Bear (source: free music archive)

FEEDING SOCIAL JUSTICE TO THE MASSES

Applying critical analysis to food is essential to understanding and framing “big picture” ideas about white supremacist capitalist heteropatriarchy. So many people feel gaslighted by mainstream food media, which paints their cultures/experiences as “other” and in need of interpretation by tour guides. We wanted to create an accessible starting point for the difficult but important conversations about the discourse that affects our daily lives, and thus Racist Sandwich was born. 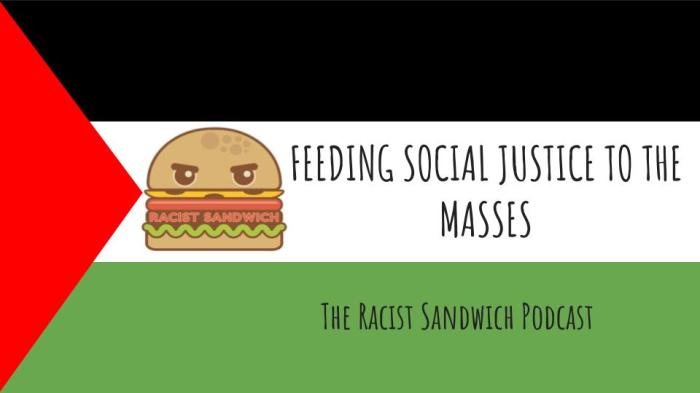 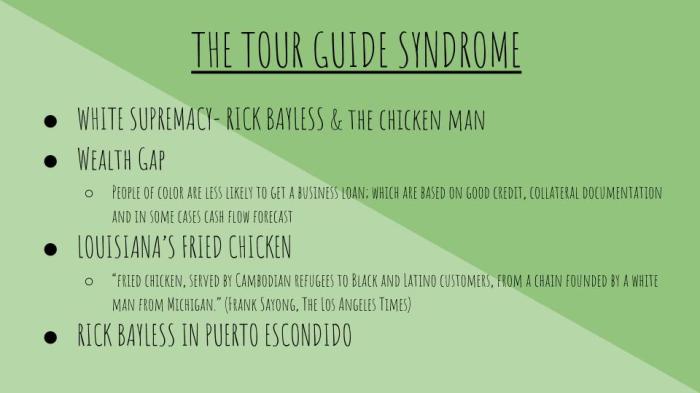 When was the last time you saw yourself reflected in the art that you love? For Portland’s Taneka Stotts, comic writer and editor, the answer was never. So she co-founded Beyond Press, a small-scale publisher that releases comic books featuring queer-identified and minority artists. In today’s episode, Soleil talks with Taneka about representation, Sonic the Hedgehog, and milkshakes.

In our intro, Juan and Soleil discuss the Portland Taco Festival fiasco and answer some listener questions.

Katherine Quince interviews Daniela Perez—a mentor gardener based in Portland, Oregon—and chat about the successes and failures of gardening. Also, Soleil sits down and talks to us about what is like to open a restaurant in Puerto Vallarta over an awesome audio diary. Be sure to check out her recently published essay, where Juangets reminded of an old childhood snack—cacahuates!

We celebrate our first anniversary by having guest producer Cristina Kim takes us to Oakland, Ca to talk with Wanda Stewart on the joys and challenges of teaching gardening and community farming at Hoover Elementary. Wanda welcomes us into her classroom and opens up about her goal to dismantle the negative connotations many of her students and their parents– especially from the African American community–have with getting dirty and growing food.  In a time where it’s hard to know how to best be active and engaged, she reminds us that the way forward may be as simple as working like ants.Produced by Juan Ramirez and Cristina Kim. Music by AF the Naysayer and Blue Dot Sessions.

It was bound to happen someday. Our killer founding producer and editor, Alan Montecillo, is leaving us (and Portland) to work as a producer on the 21st, a news and culture talk show from Illinois Public Media. We always knew his talents and Hufflepuffiness would take him somewhere great, and we’re so excited to watch his career progress from afar. Best of luck, Alan!

In this episode, we say goodbye to Alan and introduce our new producer and editor, Juan Ramirez. Like Alan, Juan is an Oregon Public Broadcasting alum, and we first encountered his work through a piece he did for Think Out Loud. Called, “DACA Now: Returning To Mexico For The First Time In 17 Years,” the gorgeous segment features Juan recalling a visit to his birthplace in Puerto Escondido, Oaxaca, to visit his relatives and ailing father. All of this is colored by the fact that Juan is a DACA grantee: an undocumented immigrant granted administrative relief from deportation because he was brought to the US as a child. Think Out Loud was generous enough to allow us to replay that segment on our show, and we think you’ll love it just like we did.

One more thing: this didn’t make it into the episode, but we’re excited to announce that we’ve been nominated for a Digital Media: Culinary Audio Series Award from the International Association of Culinary Professionals (IACP)! Woohoo!

Los Angeles-based Chicano Batman today released their third album, Freedom is Free. That title is more than a rebuttal to the familiar Iraq war rallying cry “Freedom isn’t free,” but encompasses something of the band’s universalist ideal, that we all want essentially the same things out of life. The quartet of Bardo Martinez, Carlos Arevalo, Eduardo Arenas and Gabriel Villa stopped by our studio before their concert last week, for a set of soulful songs off the new record. They were joined by backup singers from the band 79.5, who are opening for Chicano Batman on their national tour. The tour includes stops at SXSW this month and Coachella in April.

Watch the band’s performance in the player above and listen to the interview below with opbmusic contributor Juan Ramirez, as the group talks about “Freedom is Free” and why they’ve got a superhero in their name.

The Obama era has come to and end. Like many, I have mixed feelings about this past presidency. Obama’s legacy has now been set in stone—per say. He was often criticized by the “right” and rejected by the “far-left” or “woke” individuals, but not many people argued his “Liberal” title. Whether “Liberal” was used in good faith or a bad connotation, he was always the face of the “Liberals”. I recall the first time I saw Obama in person. He was hope, and I, an undocumented immigrant ate it up.

In 2007 a pre salt-and-pepper hair Obama was making his rounds in Los Angeles, California during the Democratic Party primary campaign for the 2008 Presidential election. Then, I was working under the table at a solar panel factory, on the outskirts of South LA. Word got to me that Obama, a democratic contender challenging Hillary Clinton, was going to be at the Los Angeles Trade Technical College or Trade Tech as locals call it. Meanwhile, at the same time that day—by coincidence—Republican runner-up, John McCain was going to have a press conference with the then California governor Arnold Schwarzenegger at the factory I was working at. At the risk of losing my job, I skipped work and decided to meet up with friends at Trade Tech. It was a hot day and lingering around a sea of people could only be bearable if we could actually get to see Obama speak. I slithered through a crowd of Black and Brown bodies. I found a place by the podium, where my flip-phone’s camera could make up an image big enough to know it was Obama in the picture. He spoke, and the crowd went wild every time he paused. I myself began feeling euphoric.

After a moving speech, Obama was getting ready to leave. I quickly walked towards the place he was going to exit – just to see him up close one last time. He left the stage and walked towards my direction. The crowd around me grew almost instantaneously. He was shaking as many hands as he could before getting near me. I wanted to reach out and shake his hand, but at that moment I knew it was going be impossible. I was just going to end up looking like those basketball fans on TV-the ones that get left hanging while the players head to the lockers. I quickly yelled nervously in broken English, “You are the president of the immigrants!” He turned turned my way but we never made eye contact. I was happy. I was sure he heard my voice.

As Obama left Trade Tech a team of secret service security followed him closely. I was still feeling the “Hope” from the speech so I ran towards a street corner where his caravan was going to pass by. When I got to the busy intersection, I could see Obama in the back of his bulletproof limousine with a window halfway down waving at people. Again I yelled, ”Obama, you are the president of the immigrants!” He looked my direction and wave. I chose to believe he was waving at me. I was convinced he recognized my voice.

One of Obama’s campaign promises was to enact a comprehensive immigration reform. At the end of his second term he never met that promise, in fact, according to Immigration and Customs Enforcement or ICE, his administration deported 2.5 million undocumented immigrants, which is more than any administration in US history. Obama was named “The Deporter-in-Chief”. He really cracked down on immigration, but not the way he promised during his first term campaign. He created more families with broken homes. My home was one of them. My father, for example, was deported during Obama’s first term. He suffers from alcoholism and was arrested after being involved in a fight due to intoxication. He was handed over to ICE. I didn’t see him for almost a decade, until Obama signed the Deferred Action for Childhood Arrivals immigration policy or DACA, as an executive order. With DACA I was able to leave the country under parole and visit my dad.

Many undocumented immigrants, like myself, feel uncertain about the future because we have gotten empty promises in the past. Obama’s presidency was not an immigrant friendly one. It took community organizing in order for Obama to take action on DACA. I am grateful for those who were in the front of this fight. I wondered, what if he wasn’t a lame duck president? Had he had control of both the House and the Senate, could he have done more for the immigrant community? As these unanswerable questions scroll through my mind, I chose to believe Obama was waving at me.

I had the privilege to work with Pepe Moscoso, host of Fusion Arte Radio—Broadcasted out of Portland, Oregon from the KBOO Studios—to Co-produce Lente Movil: The Other Side Of My Community.

“Lente Movil is a mobile art project that interweaves image and storytelling, featuring stories from the Latino arts community(in Portland, Oregon). This installation project explores the creative life of each Latino person interviewed. This project celebrates the diversity of Latinos to honor our roots and delves into the conversation of creative inspiration.

The passion of each Latino interviewed is something we must be willing to share if we want to inspire others because expressive passion is contagious because of the curiosity it stirs in others.”-BlindInsect.com