Not that long ago I was a victim of clickbait. As I was scrolling down on my Facebook wall I saw an article on Latino Skateboarders. It read, “10 Latinos who are making a name for themselves in Skateboarding”, or something along those lines. As a curious skater and a Latino, I clicked on the link. The article made it seemed like it was a rarity for a Latino to thrive in this sport. I was disappointed that it didn’t acknowledge that Latinos have shaped the sport since the early days of modern skateboarding.

We might think that Skateboarding is the White America’s action sport. Skateboarding, as we know it, began in the 70’s in Southern California. It was meant to imitate surfing on concrete. During this time a group of kids from Venice and Santa Monica, joined a skateboarding competition team called The Zephyr Boys. Among those kids were Tony Alva and Stacy Peralta, Two Mexican American kids. With innovative spirit and a different look at skateboarding, they helped shape what we know as skateboarding today.

According to Vans: Of the wall: Stories Of Sole From Vans Original, by Doug Palladini, in the days when skateboarding tricks only included downhill racing and flat ground handstands, Alva and Peralta would skate drained backyard pools to imitate surfing waves. Tony Alva did the first aerial trick when he went off the pool walls. Vans’s “off the wall” slogan come from that historic moment. Eventually Alva helped popularize the sport into a world phenomenon. 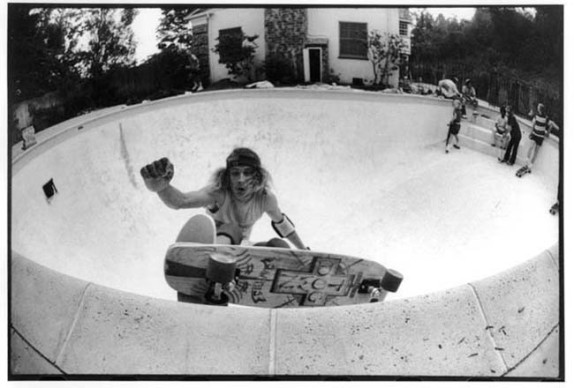 Stacy Peralta did the first skateboarding TV cameo in pop culture, appearing in an episode of Charlie’s Angels. He went on to co-created the Bones Brigade skate team, which helped introduce famous skaters like Lance Mountain and Tony Hawk.

Peralta also became a filmmaker. The documentary Crips and Bloods: Made in America is among one of the films he has created. The film depicts the origins of two rival African American gangs.

In the late 70’s there was lack of quality skateboarding materials. Fausto Villeto, an Argentine native, co-founded Independent Trucks Company. Trucks are the pieces that connects the wheels to the skateboard. Vitello’s parents fled Argentina’s Revolucion Libertadora (Liberating Revolution) in 1955 and settled in San Francisco.

Mark Gonzales, a native of South Gate, California, was the first person to skate a handrail, thus setting the blue prints for modern street skateboarding. In 1984 he was featured in the cover of Thrasher Magazine. In 2011 according to Thrasher, Gonzales was the “Most Influential Skateboarder of all Time”. Gonzales now resides in New York City with his family and has become a renowned artist.

One thought on “The Latinos Who Helped Shape Modern Skateboarding”